Boston North Shore insurance… what does it have in common with energy efficient homes? According to green construction experts, it is expected the number of U.S. homes using energy efficient solar panels may soon reach a million. The concept of solar power has been around almost as long as man has wondered about harnessing the sun’s energy. While solar water heaters were first used in California in the 1890s, it wasn’t until the 1970s when oil prices were rising that solar began gaining traction as an alternate energy source. Oil-rich middle-eastern countries placed an embargo on oil shipped to the U.S. The state of California was among the first to offer a 55% tax credit for solar systems purchased by businesses and homeowners. By the 1980s large solar thermal power plants started being built and photovoltaic power plants began as demonstration facilities to test the accumulation and utilization of solar energy. 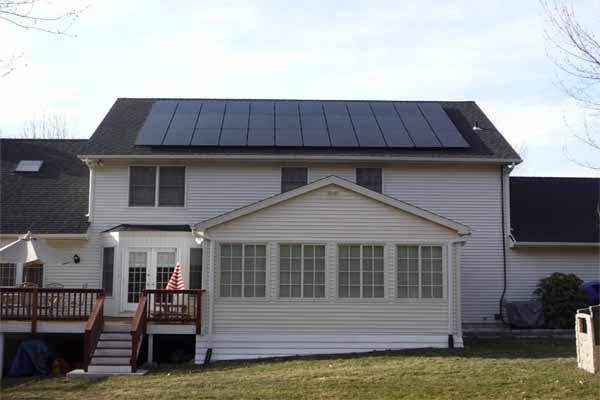 Delivering solar energy in an effective, affordable manner has always been the biggest challenge. Generating electricity by solar (either a thermal facility or photovoltaic) is still more expensive than using natural gas. Today, roughly 11% of California’s total electricity system is from renewable energy (wind, solar, geothermal) and of that total, solar comprises less than 1% – primarily due to cost concerns. With this in mind, let’s answer the question, “Does it cost more to insure a solar home?”

As mentioned above, it is expected that the number of American homes that have switched to solar energy will reach the million mark sometime this year. That number may not sound very impressive given the length of time solar capture technology has been in existence. However, just a decade ago the U.S. had only 30,000 solar homes. The growth in the market since that time has been extensive.

Despite the rise in solar popularity, a number of prospective solar homeowners are still “on the fence” when it comes to the decision of whether to go solar. The most frequent questions concern the cost of installation and maintenance, aesthetics and design, and what affect going solar will have on their Boston North Shore insurance premiums. As one homeowner contemplating a solar home asked, “What will it cost me to insure my home with a few hundred pounds or more of silicon and glass on my rooftop?”

To answer that question let’s look at the facts. Understanding them will probably convince you that most homeowners have less reason to be concerned than they may think. Solar panels for residential homes are becoming more affordable than ever – in addition to getting more aesthetically pleasing. So, reducing your home’s carbon footprint with sustainable energy won’t mean a substantial increase in your homeowners’ insurance premiums. Consider these reasons:

A house is a house and a green home is still a home.
It’s possible to purchase a third-party insurance policy to cover just your solar panels. However, most standard Boston North Shore insurance policies provide that coverage. For example:

Coverage on the dwelling. Most standard homeowners’ policies provide coverage on the dwelling or the home’s structure, including the frame, the walls and the roof. Solar panels mounted on the rooftop are considered part of the home’s structure and are usually covered. As a matter of fact, depending on the design of the solar panels they may even provide your roof with added protection from rain, hail and high winds.

Of course, specific coverage limits vary according to the insurance provider and the type of policy, but the basic concept of home insurance remains consistent. Furthermore, a home is still a home regardless of whether it’s powered by renewable energy or not.

Saving with solar.
With the growth in energy efficiency and sustainability, the topic of green insurance has received more attention than ever. Homeowners who are environmentally conscious will be happy to know there may even be money-saving opportunities when it comes to insurance premiums. Let’s look at two examples:

Premium discounts are available for homes meeting certain energy-efficient and sustainability standards, and solar power should certainly contribute to that goal. One popular example is the Leadership in Energy and Environmental Design (LEED) certification. While the LEED standards are strict, your Boston North Shore insurance provider may offer a discount if your home meets the program requirements. In addition, as an energy-efficient homeowner, you could become the beneficiary from the highly-regarded reputation of other low-risk consumers known for their commitment to responsibility, creditworthiness and trust. Those traits may translate into lower premiums.

Lastly, the more you know and understand about solar energy and installing solar panels in your home, the better off you’ll be when it comes to anticipating all the costs associated with solar. Remember, the technology has come a long way – and will likely progress even further in the near future.

As always, we recommend you discuss insuring a solar-powered home with your Boston North Shore insurance agent. Learning more about the costs may separate fact from fiction and shine a little light on the subject of going solar.

Remember to also check us out by Following us on Twitter and Finding us on Facebook. Check us out there, too.